Now…let’s get some ice cream and celebrate!

This was a good week. I closed five of my nine Bank of America accounts this week. First of all, these were all business checking accounts which required a $3,000 minimum balance in each of them. I moved them over to Navy Federal Credit Union, which has a $5 minimum balance per account. As a result, I just freed up $17,975 in capital for the five businesses.

When I went into the Bank of America branch to close the accounts, I asked if I could receive cashiers checks. The branch manager had the audacity to tell me that there would be a $20 charge PER ACCOUNT to receive my own money. She told me I was more than welcome to write myself a check, however for three of the five accounts, I didn’t have any blank checks. No thanks, Bank of America – I did an ACH instead; and unlike Bank of America, if I initiate the ACH from the receiving bank’s system, there is no charge at all.

I just received a phone call from Bank of America asking how one of my businesses is doing. Currently, I have five business accounts and one charitable contribution account with Bank of America. I thanked the gentleman for his phone call and told him that I was not in need of his services because just last week I started the ball rolling in moving all of my business accounts to Navy Federal Credit Union.

He asked me why I was leaving and if there is anything he could do to keep me as a customer. I told him that currently Bank of America requires a minimum $3,000 minimum balance in each business account; meaning that I am tying up $18,000 of capital ($3,000 of which is designated just for charity) at all times, and this is an incredible waste of money. He said he was sorry there was nothing he could do.

I thanked him for his phone call and hung up. It feels pretty good!

Yesterday I received a letter from the IRS stating that I owe them $20,624 for “early distributions” from two IRAs. Apparently, Bank of America sent two Forms 1099-R to the IRS stating that I took two full distributions (one from the Traditional IRA during the conversion and one from the Roth IRA during the transfer) from the same lump sum of cash. Add in two years of interest and penalties and that gives me an effective tax rate of 93.6% for retirement distributions that I never actually took.

In the end I will get this resolved, but in the meantime, now I have to pay a CPA to help me resolve the issue.

Thanks Bank of America!

Three months ago, I was surprised to find out that my personal rent check, which I had set up auto bill pay from my personal checking account, was sent from one of my business accounts, resulting in an accounting nightmare and will cause my extreme pain when I go to file my taxes next year.

Thinking that this was an error on my part, I quickly corrected it in Bank of America’s bill pay program.

Today I found out that once again Bank of America sent the check from the incorrect account. If only they knew how much their seemingly minor screw-ups make my life so incredibly difficult.

I could have opened an account with another bank, but since I already had six bank accounts and three credit cards with Bank of America, I figured it would be easier just to open up my new account with them. Oh how wrong I was.

The customer service representative told me that she couldn’t help me unless I could physically come into the branch office. I told her I wouldn’t be back in Columbia, MD until February 2015. She told me that an alternative would be to open the account online.

I went onto the Bank of America website to open the account. I filled out all of the required forms and hit submit. Several days later, I received an e-mail asking me to submit articles of declaration. I immediately submitted the forms via e-mail. A few days after that, I received another e-mail asking me to complete the required Bank of America form, sign it, and e-mail it in. Why these forms weren’t made available to me when I first submitted the application, nor were they mentioned in the first e-mail, I have no idea. Several days later, I received a third e-mail telling me to submit my articles of declaration. At this point I was furious. I resubmitted all of the forms via e-mail and wrote a note about how this was the third time I was submitting them and I had been waiting two weeks already for this account to be open.

At the end of the third week, I received an e-mail telling me that my account could not be opened and if I wanted more information, I should call them. So I called them. I waited on hold for 45 minutes and eventually gave up. Then I called several hours later. When I spoke to the representative, I was told that I needed to submit a utility bill in order to verify the address. I told them that I didn’t have any utility bills because I don’t have any utilities because I told have any checking accounts. The woman on the phone didn’t understand.

Looks like I’ll be opening my account elsewhere. As soon as I can, I will be closing my other Bank of America accounts and moving them elsewhere as well.

Today I tried to make a deposit via my iPhone. Why didn’t I just go down to the bank and make the deposit myself? Well, I am currently serving in the US Army in a state that doesn’t have a Bank of America. According to Google Maps, I am 1 hour and 14 minutes from the nearest Bank of America, and I need to get approval from my commander to cross state lines. So, when I receive a check in the mail, I attempt to deposit it via my iPhone. Well apparently, there is some cap on how much you can deposit every month. This is the 6th of the month, so it looks like I will be waiting until next month just to make my deposit.

Luckily, the last few weeks have been heart-burn free of Bank of America problems. However, today I received a phone call from one of my clients asking why I haven’t deposited their check yet. Sure enough, it was a check that I had deposited into my Bank of America account. Actually, I deposited it twice!

First I deposited it using the iPhone app on Jan. 09, 2013. At the end of January, I received my statement and noticed that the check hadn’t been deposited, so I deposited it again on Feb. 03, 2013. Sure enough, it didn’t deposit the second time, even though the app assured me that the deposit would go thru.

Of course, far be it from Bank of America, who sends me about 10 pounds of wasted trees a month, to somehow notify my by phone, text, e-mail, or snail-mail that something is wrong with the check and I would need to deposit it the old fashion way. 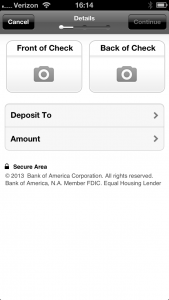 I am morally opposed to class action lawsuits because most people who sign up for them really weren’t harmed and just fill out the paperwork for the prospect of “free money”. Meanwhile the only people who really make money from them are the lawyers involved on both sides.

However, in this case, I have the opportunity to screw Bank of America…so this document did not go straight into the shredder. I’m still deciding whether or not I feel right about filling it out and sending it in.

I closed another Bank of America account today. The process was surprisingly easy and I did it all by chatting with a rep online, meaning that I saved myself about an hour of my life. Here is an excerpt from the chat session:

Marcella: I regret to hear that you want to close your account.
Marcella: May I know the reason for the account closure?
You: Because I hate Bank of America in every possible way.